Movember is responsible for the sprouting of moustaches on thousands of men's faces across Australia and around the world. The aim of which is to raise funds and awareness for men's health issues..

As part of our community initiative Austworld is supporting the Movember movement, especially since “suicide rates among young tradies are 2.3 times higher than for other men, and a construction worker is around 10 times more likely to take their own life than die in a workplace accident” ~ news.com.au

Society has become so fast paced and most of us are stressed out and mental health issues are on the rise especially in the plumbing industry. As industry leaders and a company that is focused on family values and supporting its local community Movember is a cause we want to support and help raise awareness for.

During the month of November we will be working closely with Master Plumbers Association Queensland, the Barber Bro Co and the GC Suns to raise awareness and funds for Movember.

Now in its 16th year in the Australia, Movember encourages millions of men around the world to embrace the moustache in all its glorious forms. The itchy one, the patchy one or even the lopsided one - they all help fight prostate cancer, testicular cancer and male suicide.

In Australia, the stats are shocking. This year, 3,300 men will die of prostate cancer, while more than 200,000 are living with the disease. Six men a day take their own lives and three out of four suicides are by men. Testicular cancer is the most common cancer in young men.

To get involved and support this cause you can make a donation via our campaign, join our team or pop into the Barber Bro Co at isle of capri and get a free mo touch up all month. We also have a donation box at their shop.

Stay up to date with the fun via our social media channels and checkout our campaign page here:

Grow a Mo and save a Bro 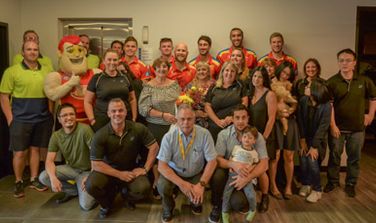 In 2017, Austworld signed on as a Major Support Partner of the Gold Coast Suns for two years.

The new sponsorship elevates Austworld’s support for the Suns, which has been there since the first bounce in 2011.

Thanks to our new commitment, you will see the Austworld brand on Gold Coast shorts, training gear and at the ground and press conferences.

Like the Suns, we are always aiming for excellence. While the Suns have ambitions of reaching the finals and claiming their first flag, Austworld’s ambition of becoming a leading manufacturer and supplier of plumbing products across Australia and the globe is well underway.